Last time, we looked at letters historical from my adventures around Sri Lanka. This time, let’s look at some more ‘contemporary’ examples.

Travel Letters
As a tourist in Sri Lanka, it felt like travel is a major part of life. With very cheap train and bus tickets available, it is easy to travel from one side of the country to the other—we took a train ride for 9 hours that cost less per ticket than the rickshaw to the train station in the morning! Crazy!

While riding the train, these station sign boards are a common sight.

All of them have the same style of lettering, even down to that really chunky ‘E’. And also note the reversed W. Really quite endearing. I found it particularly interesting how the sign painter clearly used the same tool as for the Tamil above it, resulting in the particular character of the Latin—though aspects like that ‘E’ are clearly special!

On occasion, train stations would also have their name written in more unusual places, like this lettering for the “Great Western” station on the fence beside it.   I rather liked these letters—not only for their Gothic style, but also in that they’ve made the letters slightly wider than tall, which helps make them larger and more readable at distance.

On to bus travel. Buses are one of the most common ways of getting around because while the train is cheap, it has to follow the rails. Buses on the other hand can go everywhere! I’m sure you’ll notice what caught my eye about the buses. 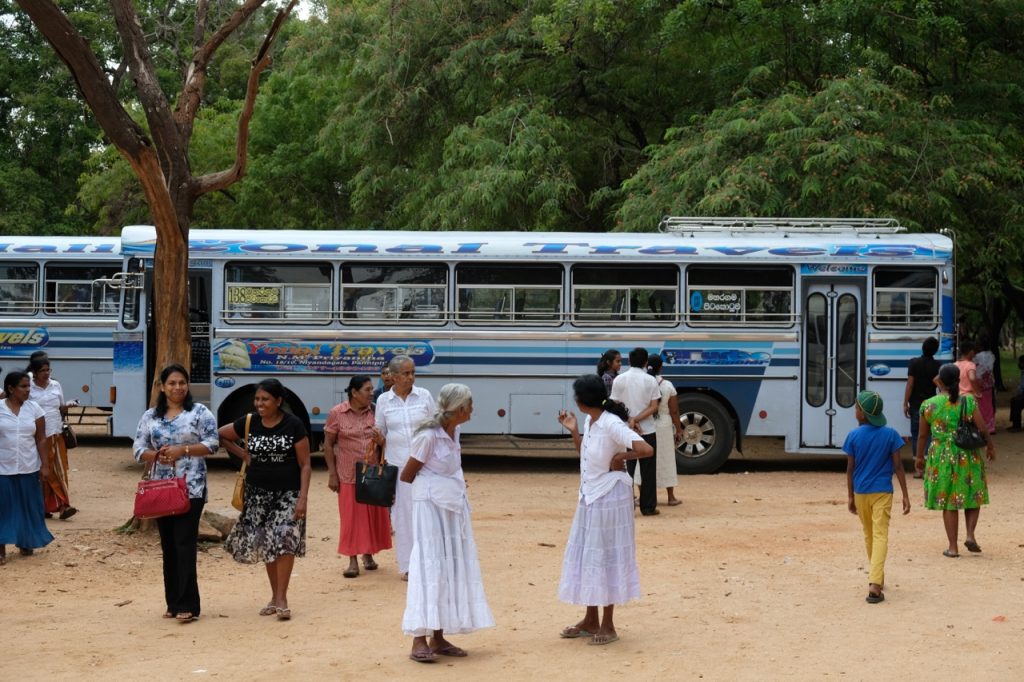 That’s right, many of them feature these crazy condensed letters just above the windows. Now, I thought to myself, “Surely there’s a good reason for collapsing the letters so much. Does it help with reading at extreme angles?” And then decided it must just be a case of wanting to put the company name on the bus and that was the space available. I can just imagine someone saying, “Here’s our logo, make it fit”. Makes me wish they’d just used a super wide font instead! Here’s another fun example:

In this case, it works a wee bit better—I mean, at least it is more or less readable! But the type choice is not super legible, which is unfortunate (did you read “Traders” there?).

City letters
Moving on from the travel type, let’s look at some letterforms from around town.

This first example is, well, not exactly “new”, but dates from the early 1900s. I found it at the hotel we were staying at in Galle. 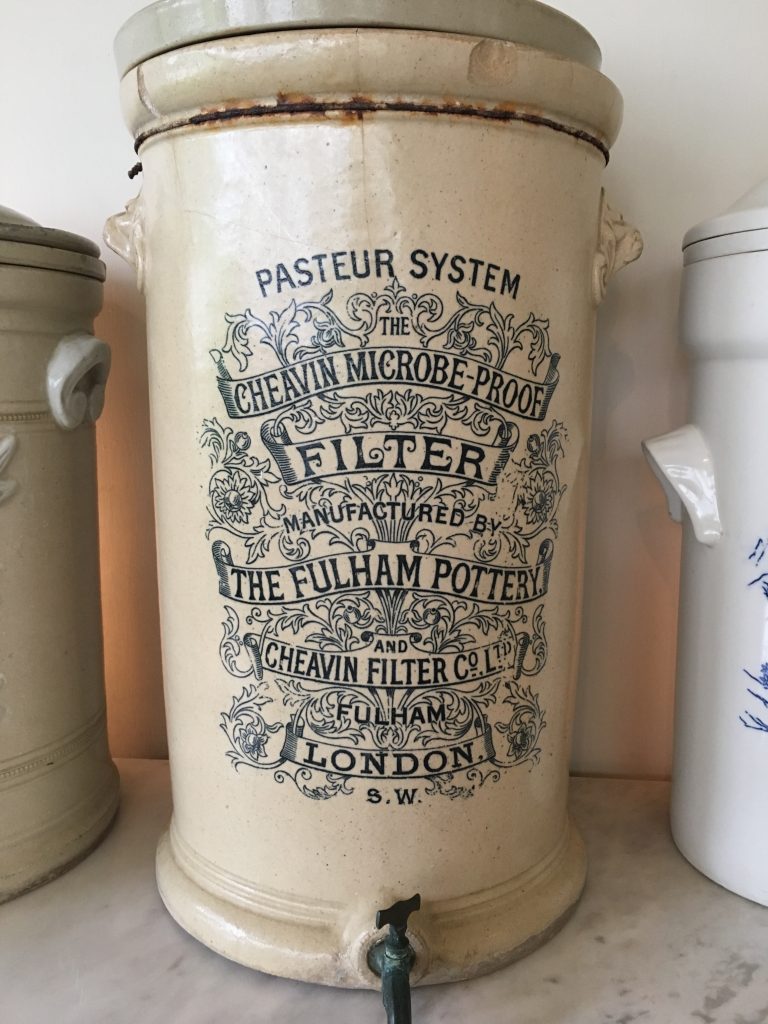 Check out those little curls! And the flexing ‘T’ in the middle. Not to mention the extensive decoration. Really a lovely little piece! 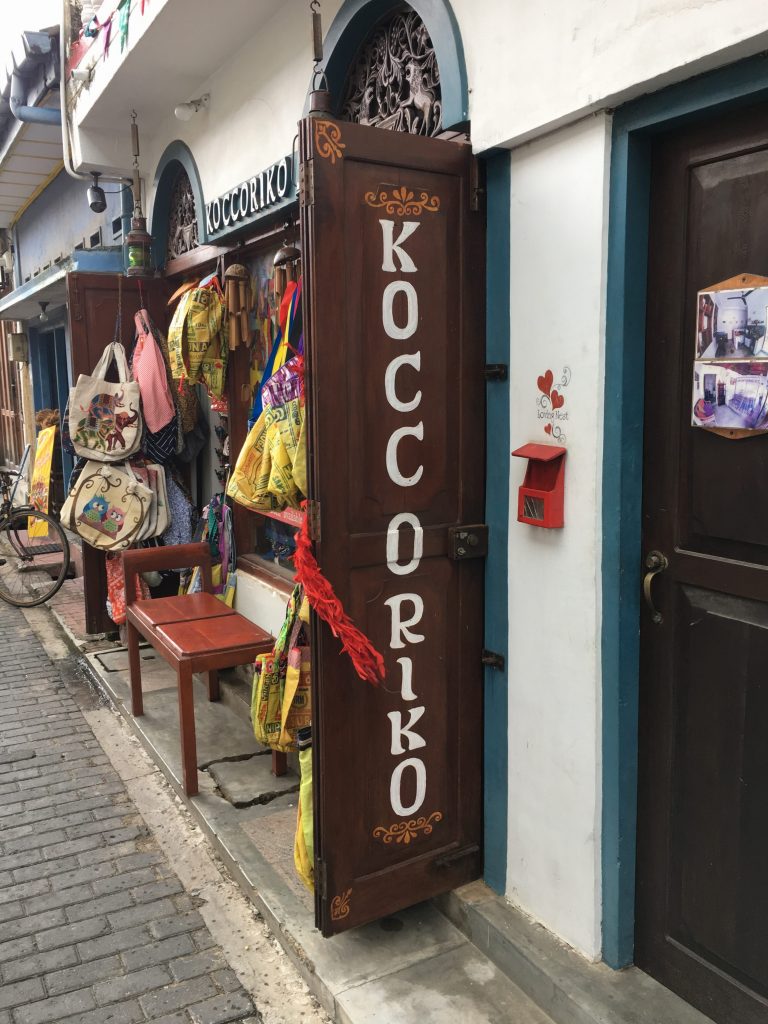 Also from Galle, the ‘R’ and ‘K’ demanded that I take a picture. Looking at the picture now, I realized that they were probably trying to replicate the logo (seen on the side of the building), but this hand-rendered version just has so much more personality than the type! 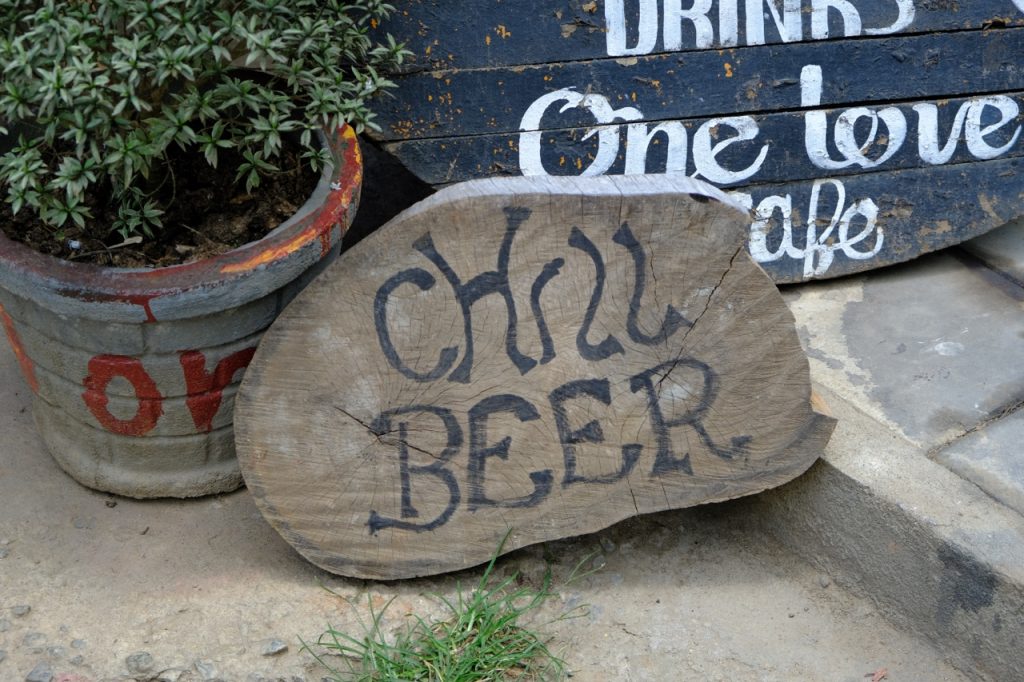 This was a cafe outside of the Ella train station. How can you look at this and not feel happy? Gotta love that ‘H’. And the ‘I’ staring up at it. Also note the cute use of a heart in ‘love’ behind it!

While take a rickshaw through Colombo, this restaurant jumped out to me. I’ve no idea what font it is, but what craziness! The super-decorative capital letters are just off-the-hook.

Now, of course I didn’t just take pictures of Latin letters :). In Sinhalese, I found the hand-written signs to be really interesting. 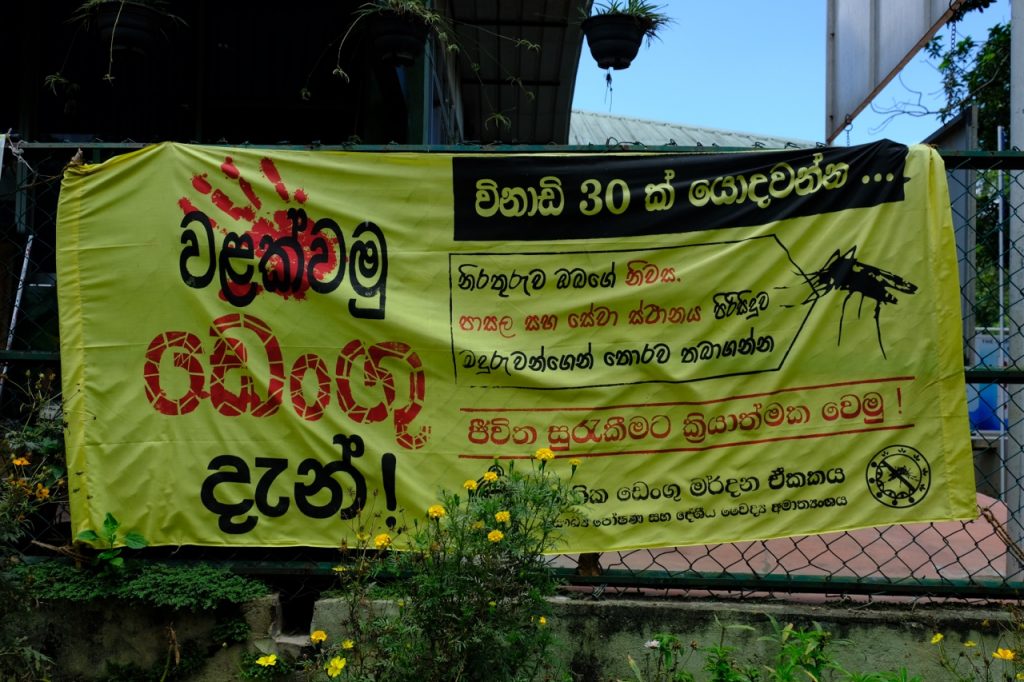 Now, just a few months before our visit, there was a massive outbreak of Dengue fever in Sri Lanka due to heavy rains and lots of standing water. So we had to wear lots of mosquito repellant. This sign, from Ella, I assume is in relation to that outbreak. There’s a lot of different styles of Sinhalese on this sign, which I found really interesting. You have the ‘cracked’ form (red, left side), a monolinear form (black, left side), a bottom heavy form (red, right side), and a hand-written style form (next to the mosquito image).

Given the different styles of Sinhalese, I thought it was interesting to see how it is hand-written. Given use of a pen or pencil, I fully expected the monolinear form to be the most common, but the heavy-bottomed form is actually quite common, even when the weighting needs to be added by hand! 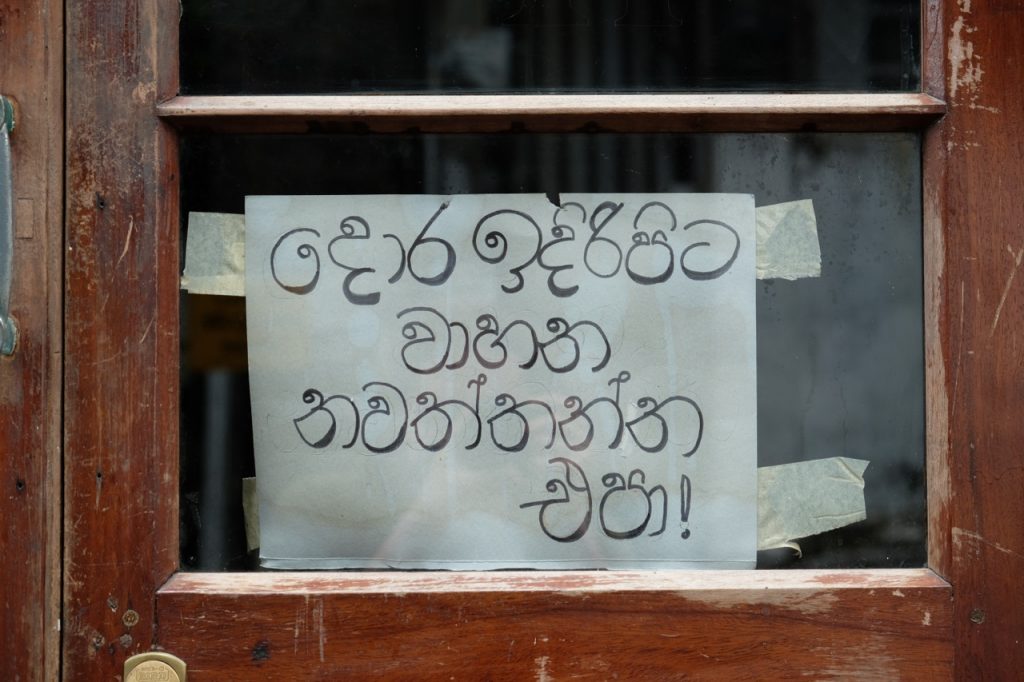 In this first example, it feels like the person wasn’t totally sure where / how to add the weighting, so just added it where it felt right to do so. The end result is a bit inconsistent, but an interesting insight into what is perceived as the right place for weight.

In this last example, the writer (or painter?) made a more concerted effort to add weighting to the bottom of the letterforms. I really liked the super-heavy look that these letters have! And also note the oblique letters below it. Sinhalese italic anyone? 😉

I hope you enjoyed this little typographic journey through Sri Lanka with me!

I recently returned from an extended trip through Sri Lanka and found all sorts of wonderful, and odd, letterforms. In this two-part blog post series, we will explore letterforms, old and new! Let’s start with the old.

Polonnaruwa
Located on the eastern side of the country, Polonnaruwa was the second capital of the Sri Lankan kingdoms, from the 11th century until 1310 CE. Unfortunately, it was particularly vulnerable to attack by invaders from India and eventually was abandoned in favor of a more defensible location. Happily, much of the stonework of the city remains, including some stunning inscriptions.

The Velikkara Inscription is a mix of Grantha Tamil and Sinhala scripts. In the 12th Century CE, Velikkara Soldiers were engaged to protect major sacred relics—the Tooth and Bowl of the Buddha—during a period of unrest. This inscription states assurances by the Velikkaras to protect these relics no matter what. 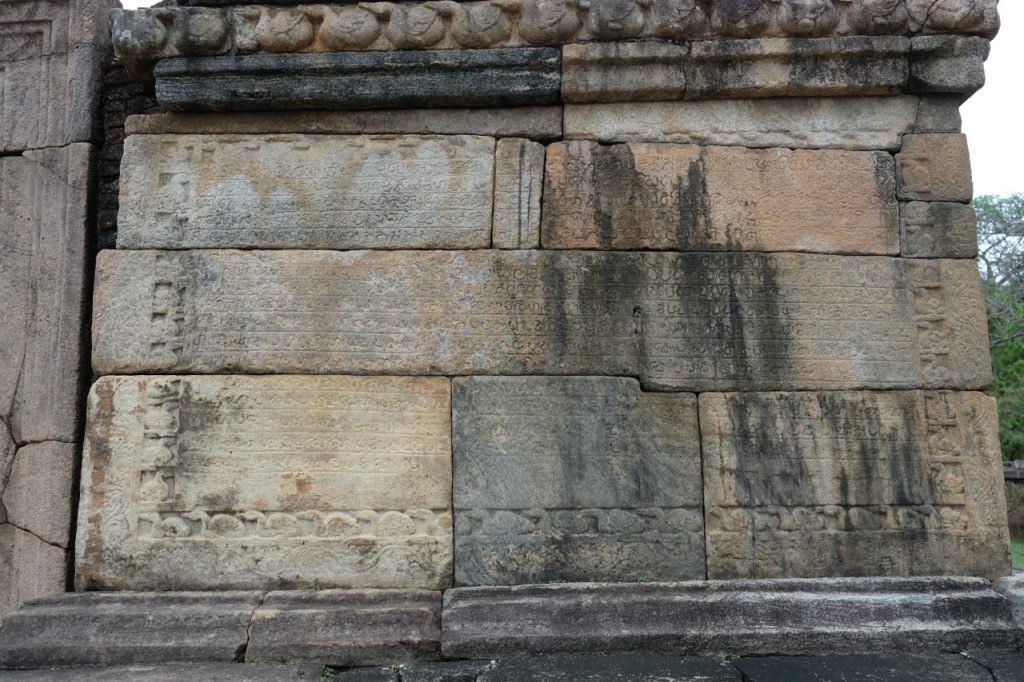 Galpota (Stone Book). This thing is amazing. Not only is it 9 meters long and 1.5 meters wide and weighs 25 tonnes, but was dragged by elephant some 100km to this location! It is shaped in the form of a palm-leaf manuscript, and includes three pages describing the genealogy and deeds of King Nissankamalla (1187–1196 CE). As you might expect, it is the largest such inscription in Sri Lanka. Sadly, I didn’t get a better picture of the text itself, but the object alone is stunning.

Dutch Reformed Church – Galle
Formerly controlled by the Portuguese, Galle was captured in 1640 by Dutch forces in partnership with King Rajasinhe II. Unfortunately, their alliance fell apart as King Rajasinhe II determined that the Dutch were no better than the Portuguese, leading to years of conflict. Galle, however, remained a Dutch stronghold on the island.

The current Dutch Reformed Church was completed in 1755 and stands at the highest point of the Galle Fort. It contains many, many grave stones both from the time of Dutch control and British control. 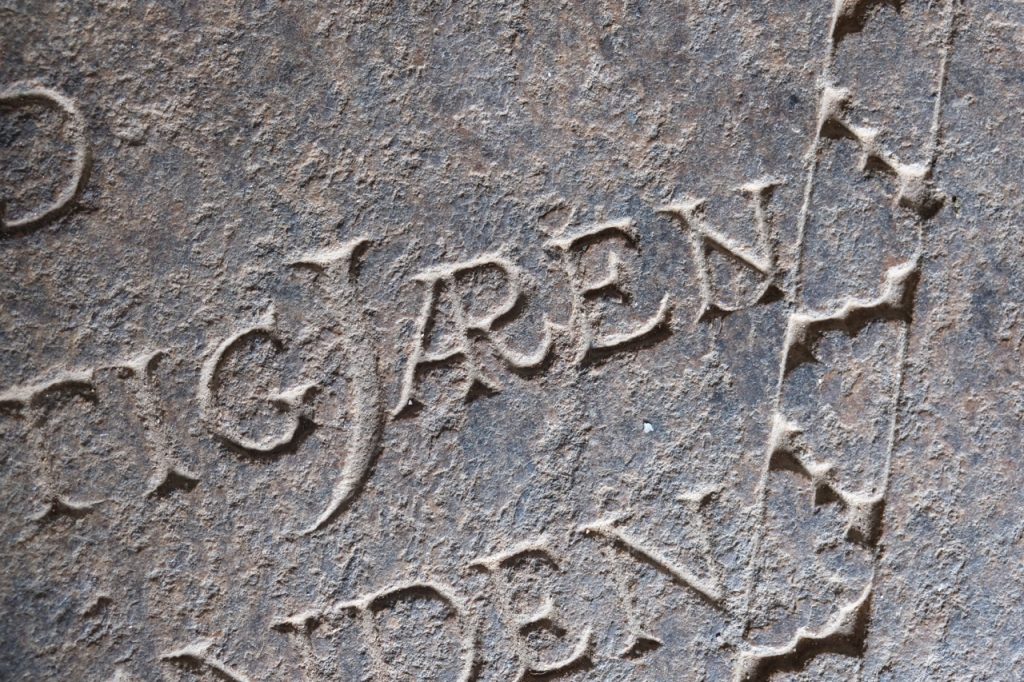 There’s so much to love in that AR ligature. And the happiness of the R tail. 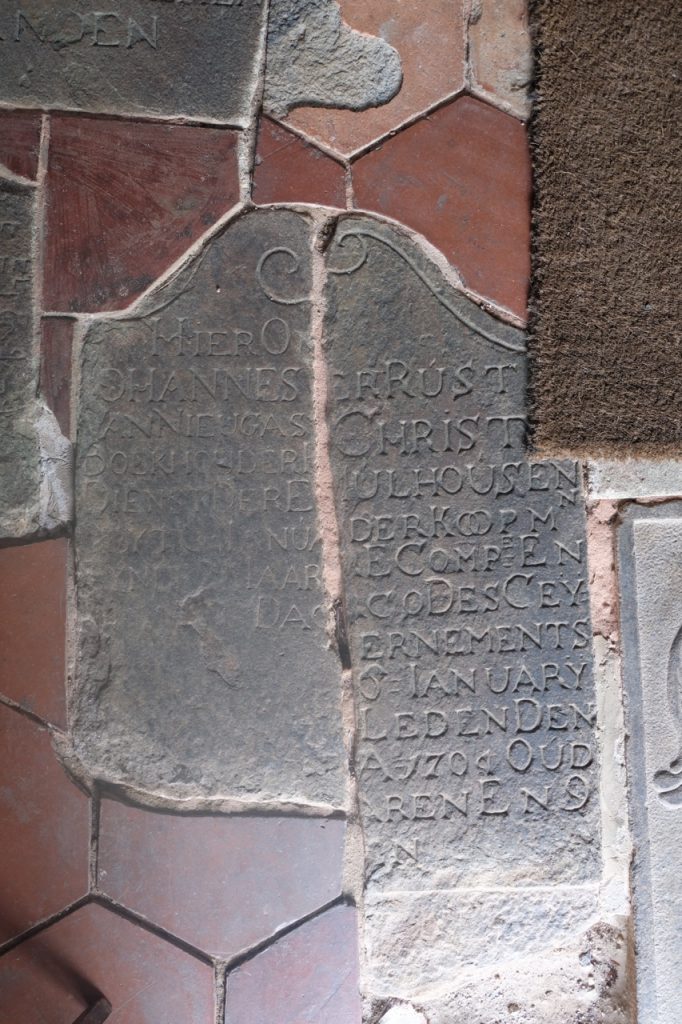 This stone was fascinating to me. It is clearly two separate grave stones that have been put together since they have a similar top. 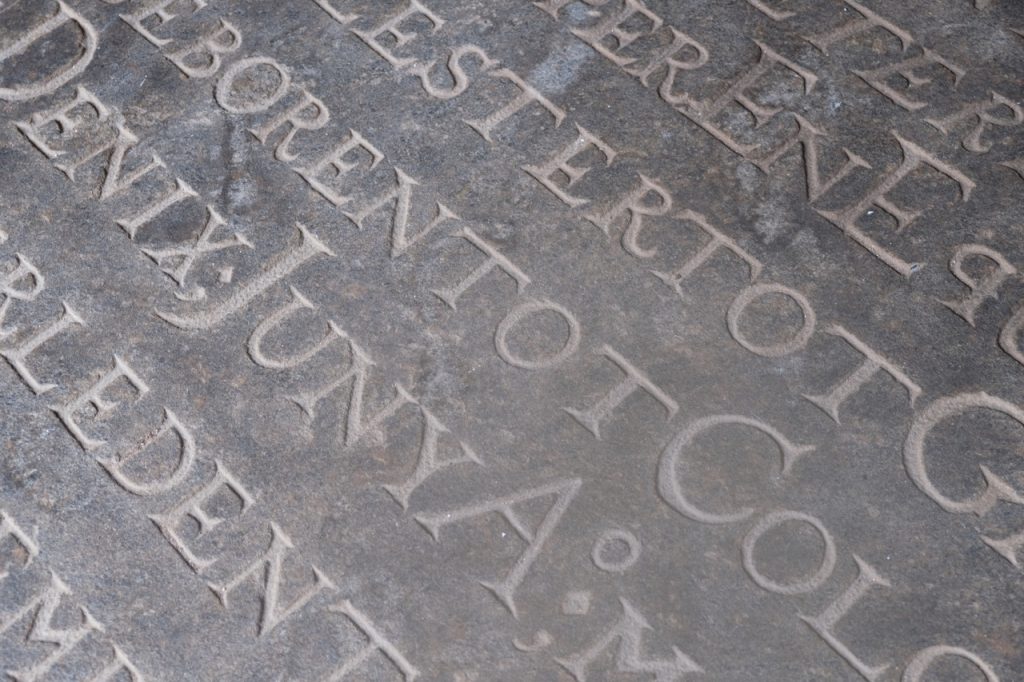 Note the interesting low crossbar on the E. Some really lovely forms!

I loved these embossed letters. Very common of the early Dutch examples at the church. 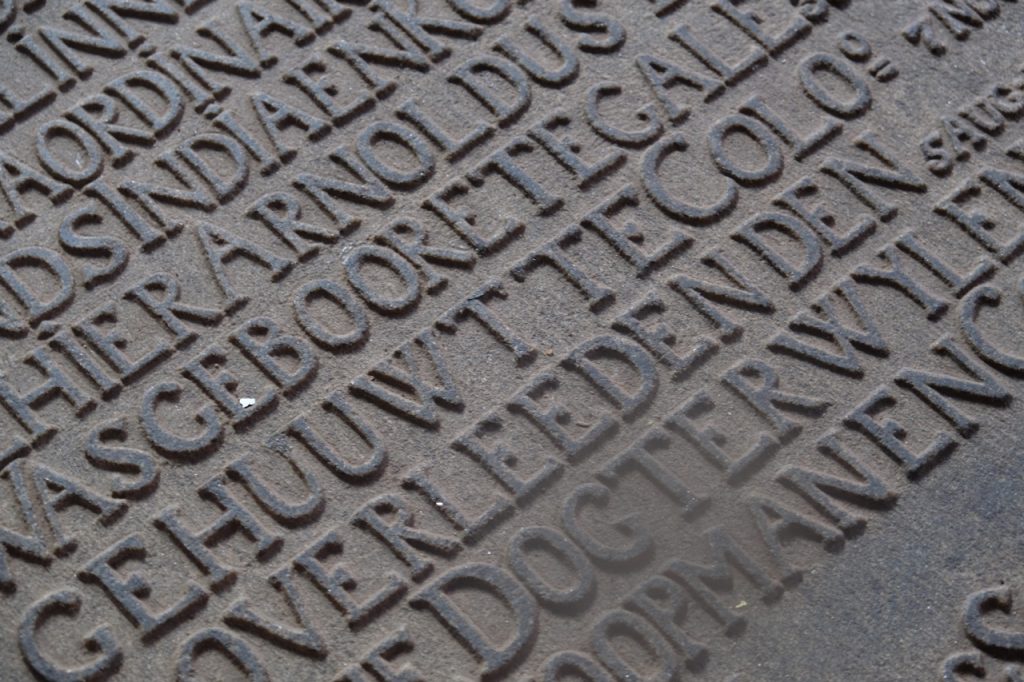 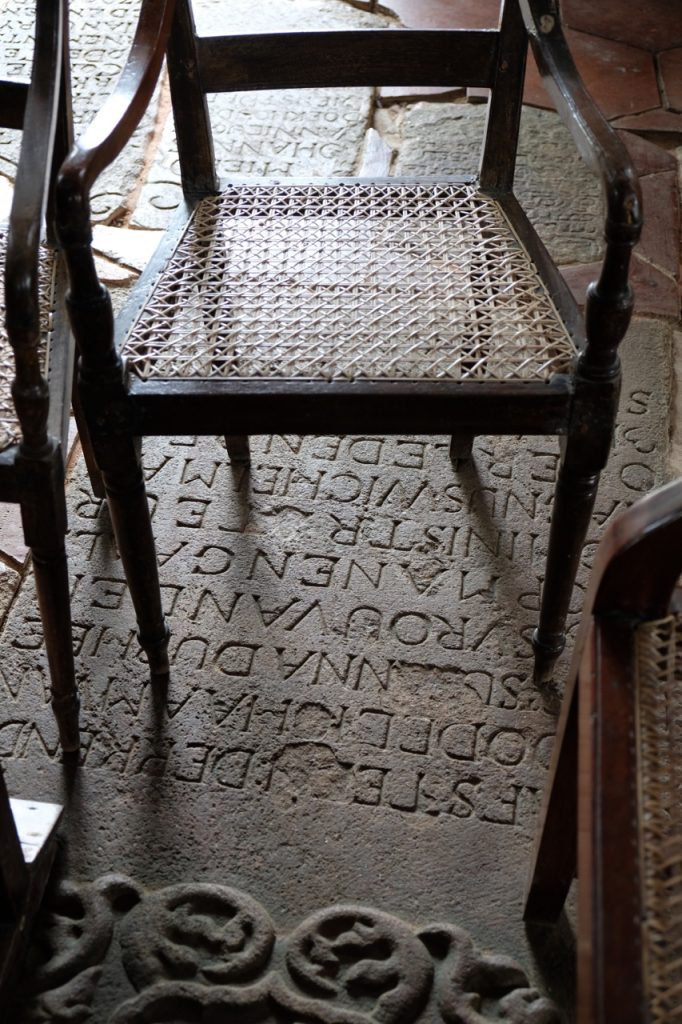 Unfortunately, because this church was quite small, many of the grave stones were covered with tables, chairs, pews, etc. Made it hard to photograph! 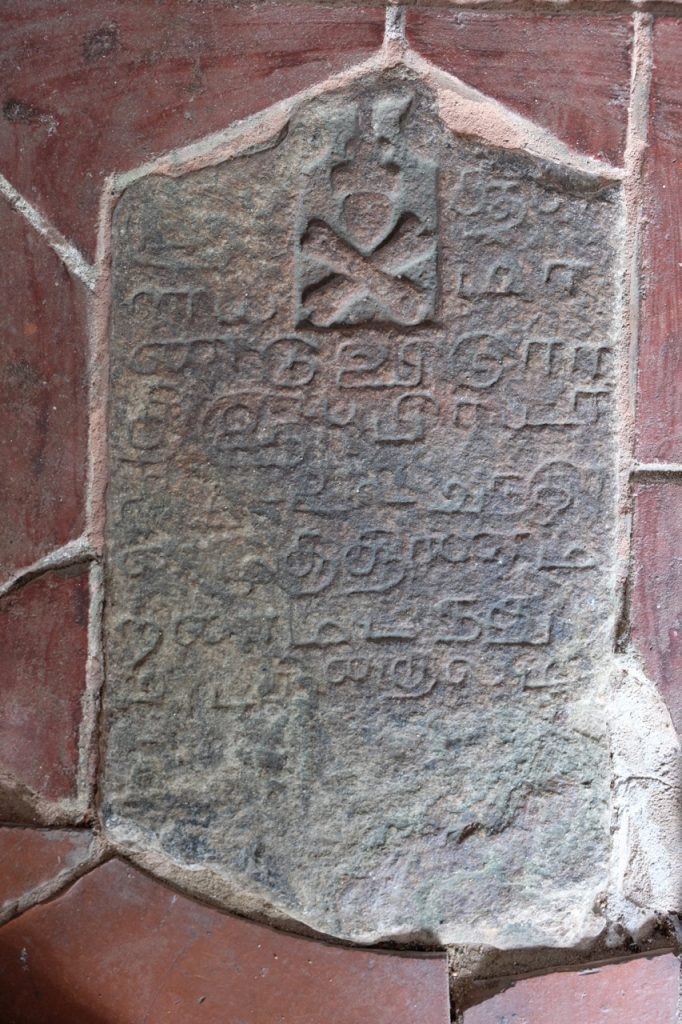 One of the most unusual stones in the church was this one, written in Tamil. Unfortunately, it is quite worn and hard to make out, but I thought to include it as it is quite special. [Edit] Apparently this is the grave of the first Tamil convert to Christianity (thanks Ben)!

Almost all the gravestones outside were completely worn down due to the annual rainstorms and wind. This one has survived better, but it is still fun to see how it is slowly falling apart.

Also while in Galle, the hotel we stayed at had a rather intriguing framed piece on the wall.

Not recognizing the language, I asked my friend Ben Mitchell (who knows much about South East Asian scripts). He identified it as a Buddhist Kammavaca manuscript usually produced for the ordination of monks. These documents were highly sacred texts usually commissioned by lay-people when a son entered a Buddhist monastery. The language is Pali (used for the scriptures of Theravada Buddhism) but the script is a Burmese square script often called Magyi-zi, or “tamarind seed script”.

How could such a document have ended up in Sri Lanka? As I began to investigate, I was surprised to discover that Sri Lanka had, at times, close religious ties with other countries in South East Asia and in particular Myanmar. For example, in 1070 CE, after a period of particularly difficult warfare, the King in Polonnaruwa invited eminent monks from Myanmar to help re-establish Buddhist practice in Sri Lanka.

One particularly interesting example happened in the 1600s. By that time, Buddhism was somewhat on decline in Sri Lanka and Portuguese priests were working hard to convert the local population to Catholicism. To combat their efforts, the Dutch helped the Sinhalese king organize religious missions to come to Sri Lanka from the Buddhist Kingdom of Rakhaing on the west coast of Myanmar. The first, in 1684, included 40 monks (and their collection of religious texts), and helped to re-establish Buddhism as the dominant faith on the island.

For more history of Buddhism in Sri Lanka, check out this great article.

That’s it for today! Check out Part 2 for more contemporary samples!