In July 2016, I attended the Wells Book Arts Summer Institute to participate in Stan Nelson’s “Understanding the Typographical Punch” course. Having studied the process of punchcutting as part of my MA Typeface Design education at the University of Reading, I jumped at the opportunity to create punches myself.

At the start of the workshop, Stan kindly provided lots of great materials from his studies for us to reference. The benches, too, were really great. 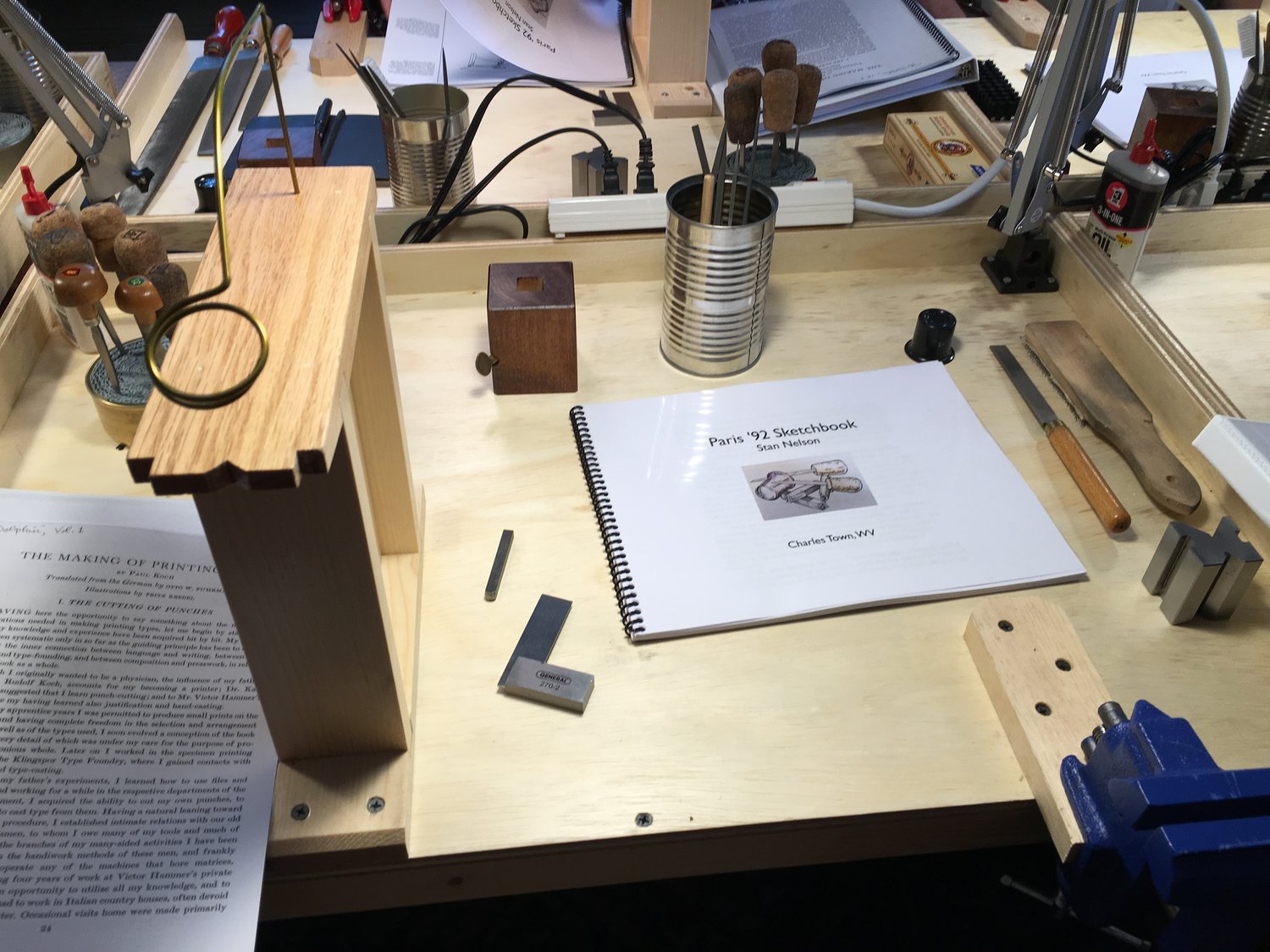 Files, lots and lots of files—we needed all of them! The largest were used first to remove the excessive steel from around the desired letterform, then we’d use ever smaller files to get the right curves. The pointed pen at the bottom was used for marking guides in the steel to visualize the letter. 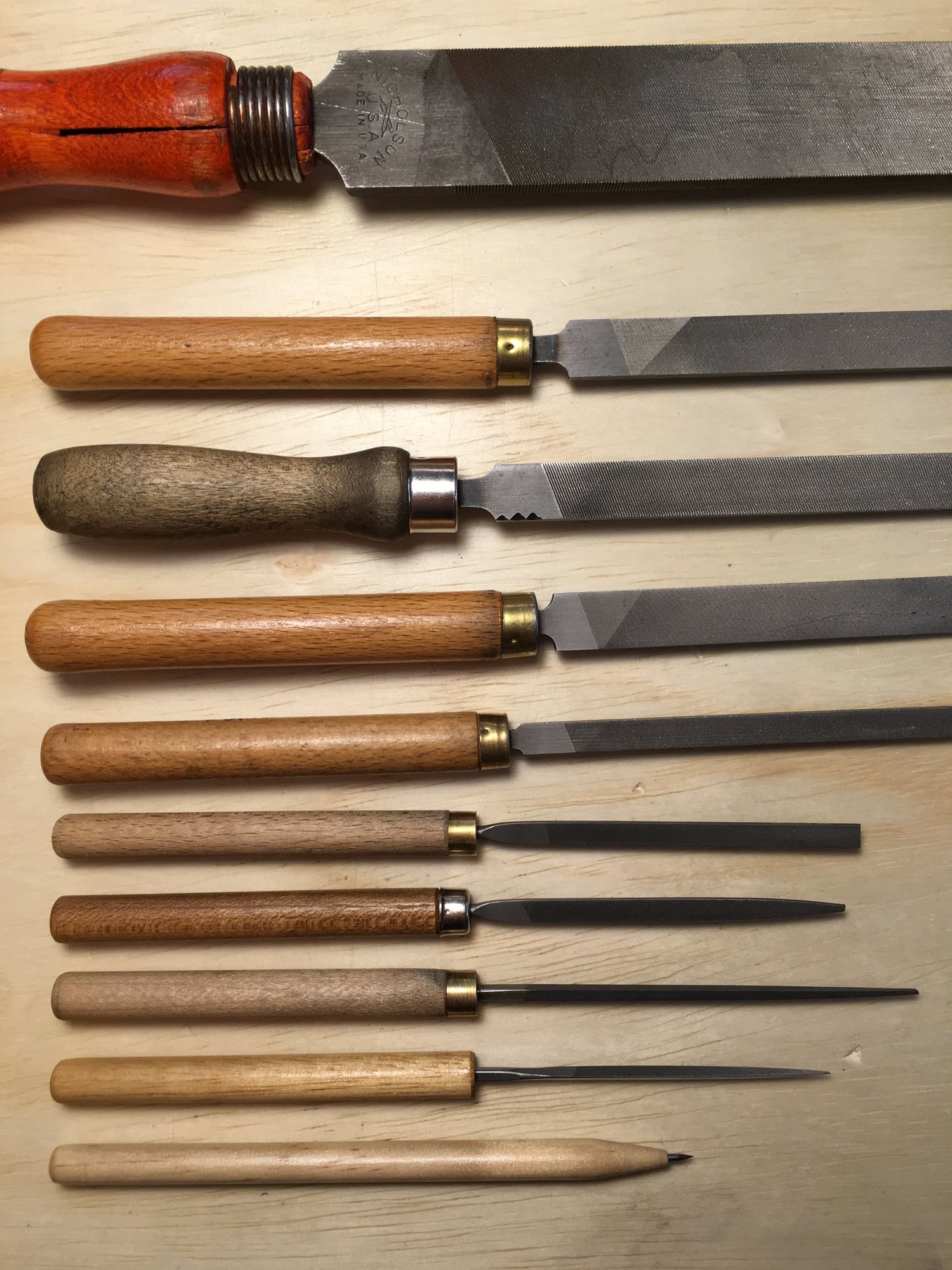 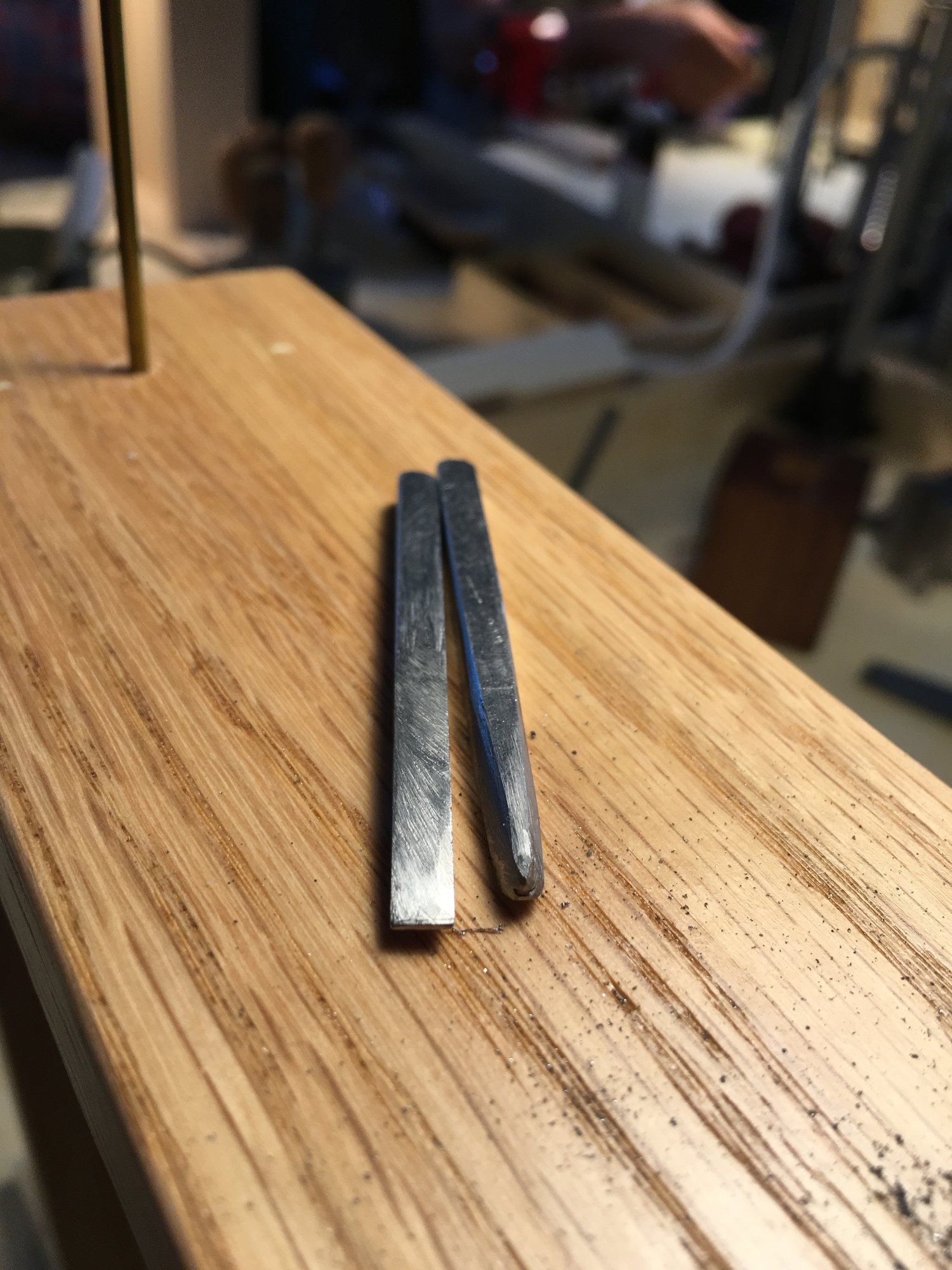 To prep the completed punches (and counter punches), we needed to temper the steel properly. Using propane torches, the punches were heated to bright red, then rapidly dropped in a bucket of cold water. This hardens the punches, enabling them to dent non-hardened steel.

Here Stan is driving a counter punch into steel.

Here we see the counters for the letter ‘A’ in the steel (as seen through the magnifier).

Filing away to create the perfect forms!

To test the letterform, we created smoke proofs. Soot from the flame is gathered on the punch, which is pressed into a piece of paper to evaluate. 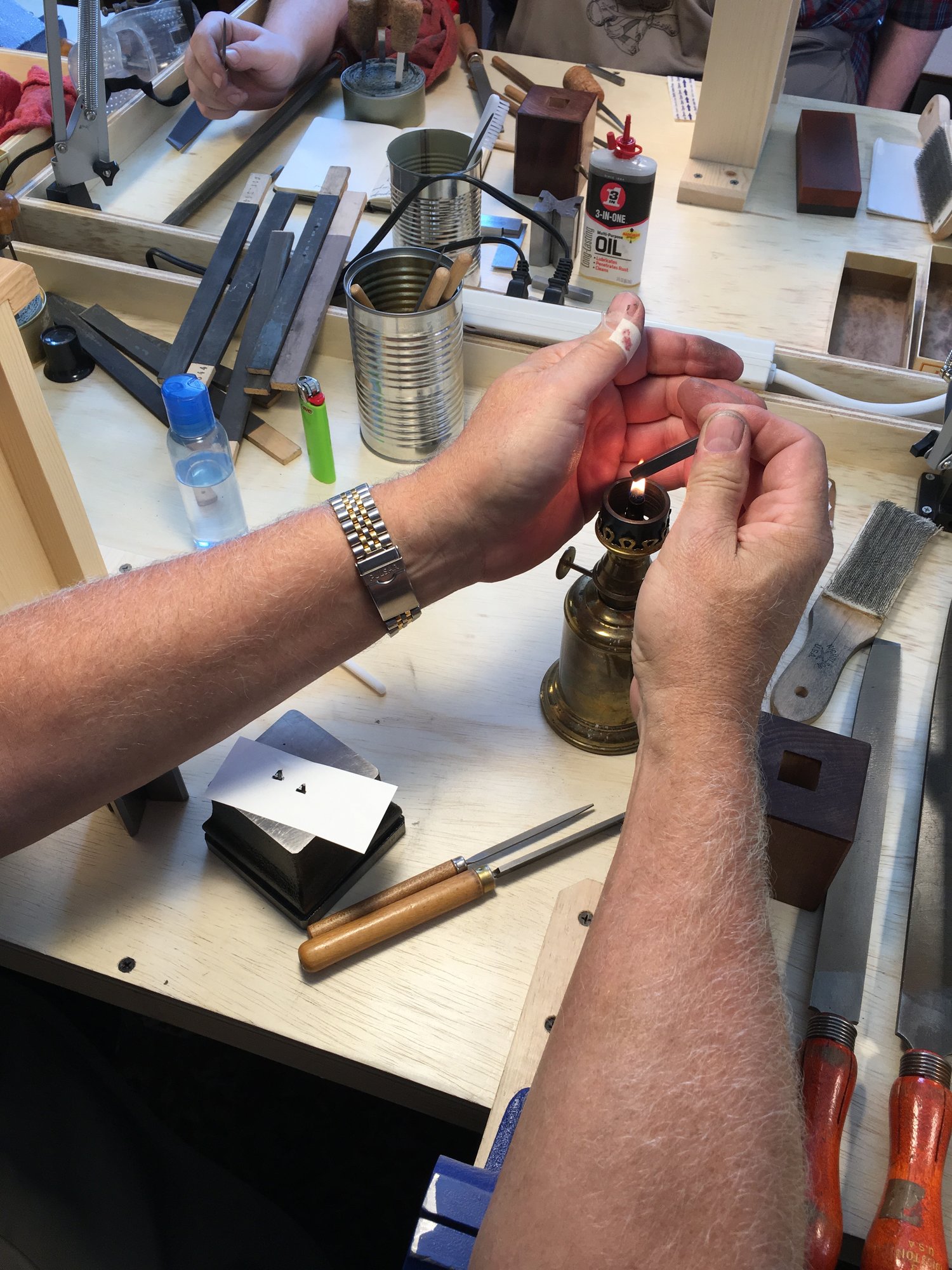 The letter ‘A’ punch, and smoke proof. 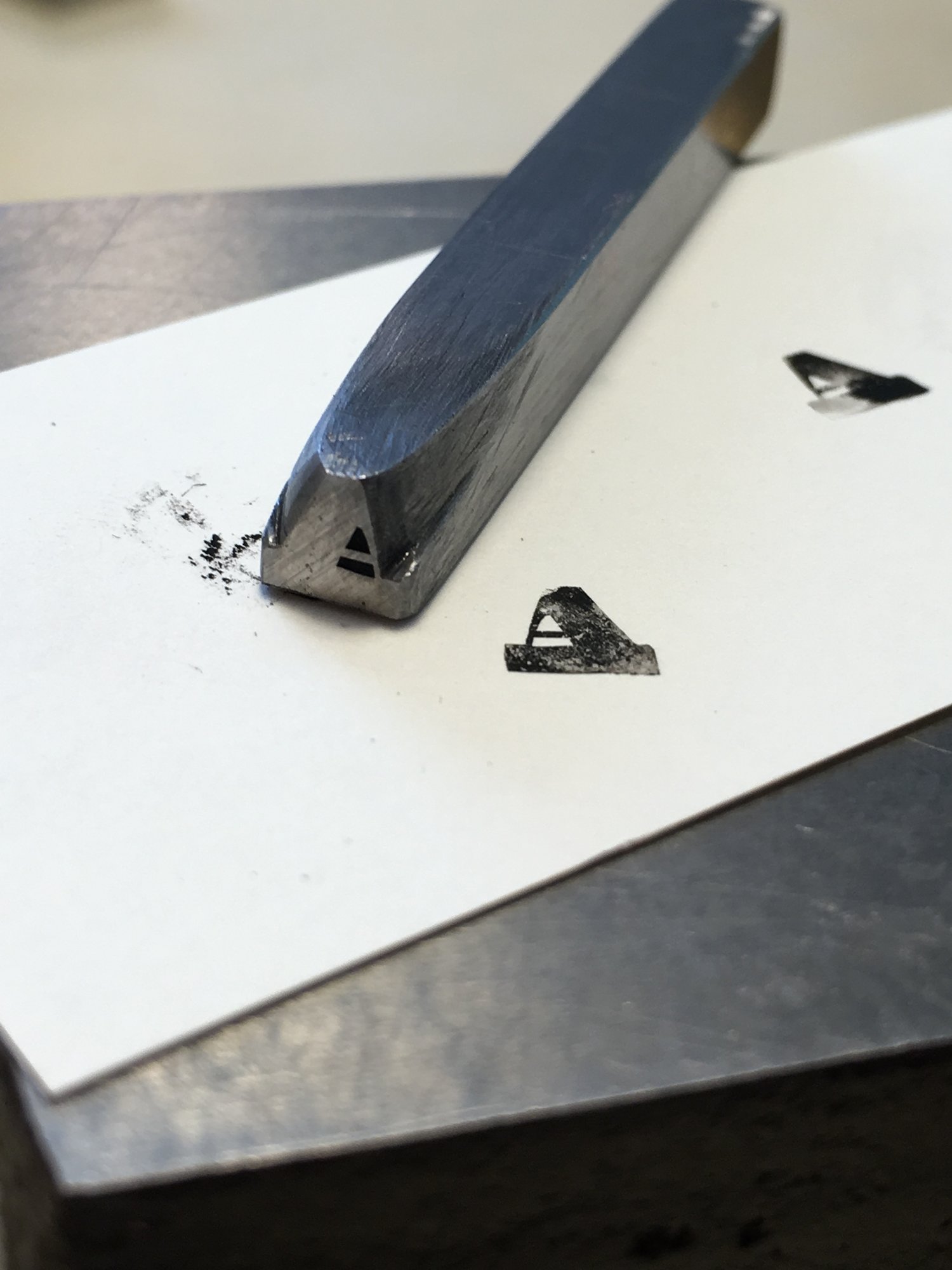 In addition to the use of counter-punches, we also practiced the use of gravers. Le Imprimerie Nationale in Paris uses this method for digging out counter forms. I found it to be a really frustrating and difficult method of creating counters—having the graver slip and scratch the surface of the punch was common, and required filing the letter back to a smooth surface.

Like with the files, there were many kinds of gravers, each serving a different purpose. 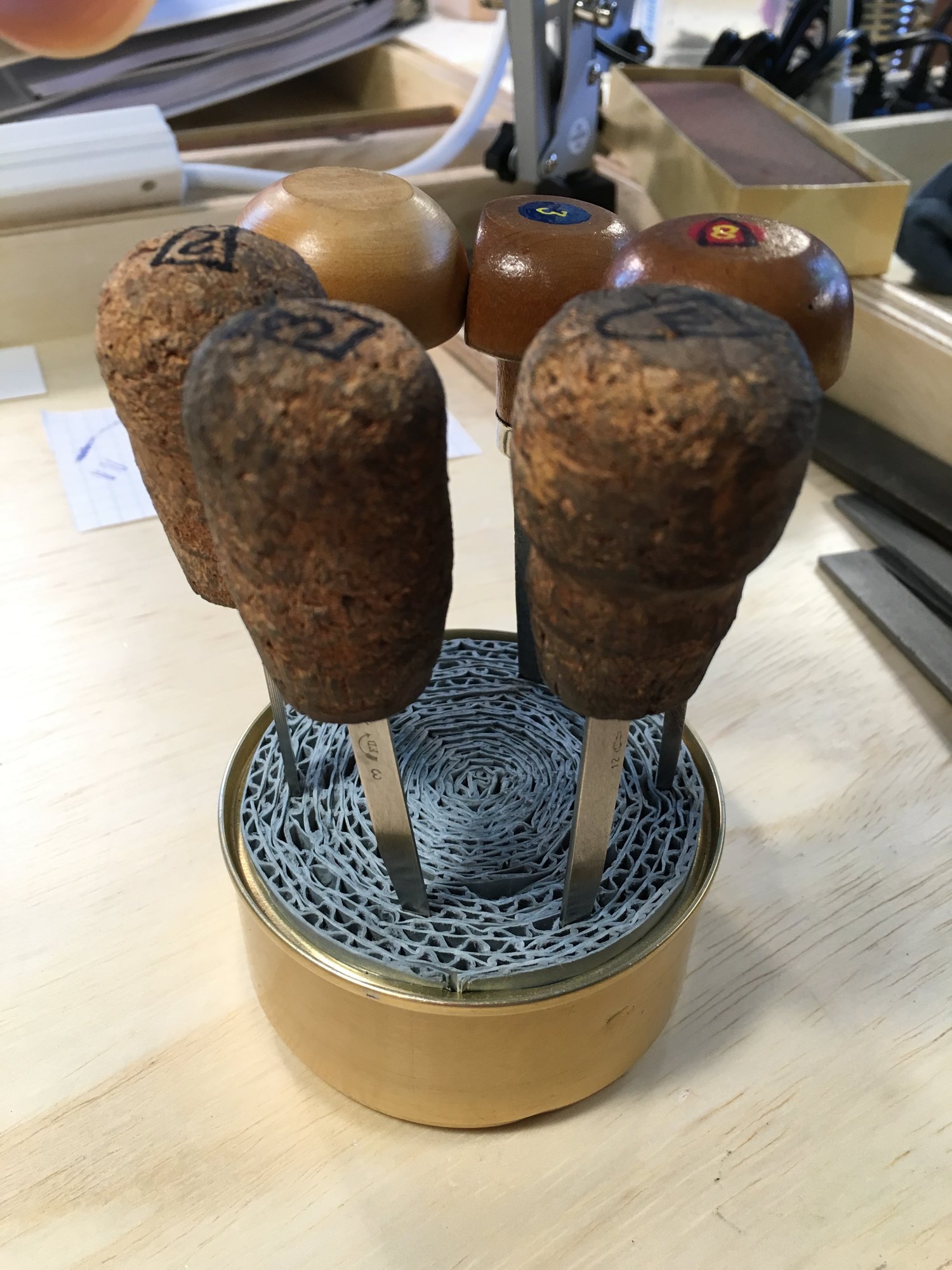 Here are the three punches I created during the workshop. That ‘G’ in the back was particularly frustrating—I think I spent a full day just trying to get the counters right using the gravers.

My workbench at the end of the class. Hard to keep things clean and organized! 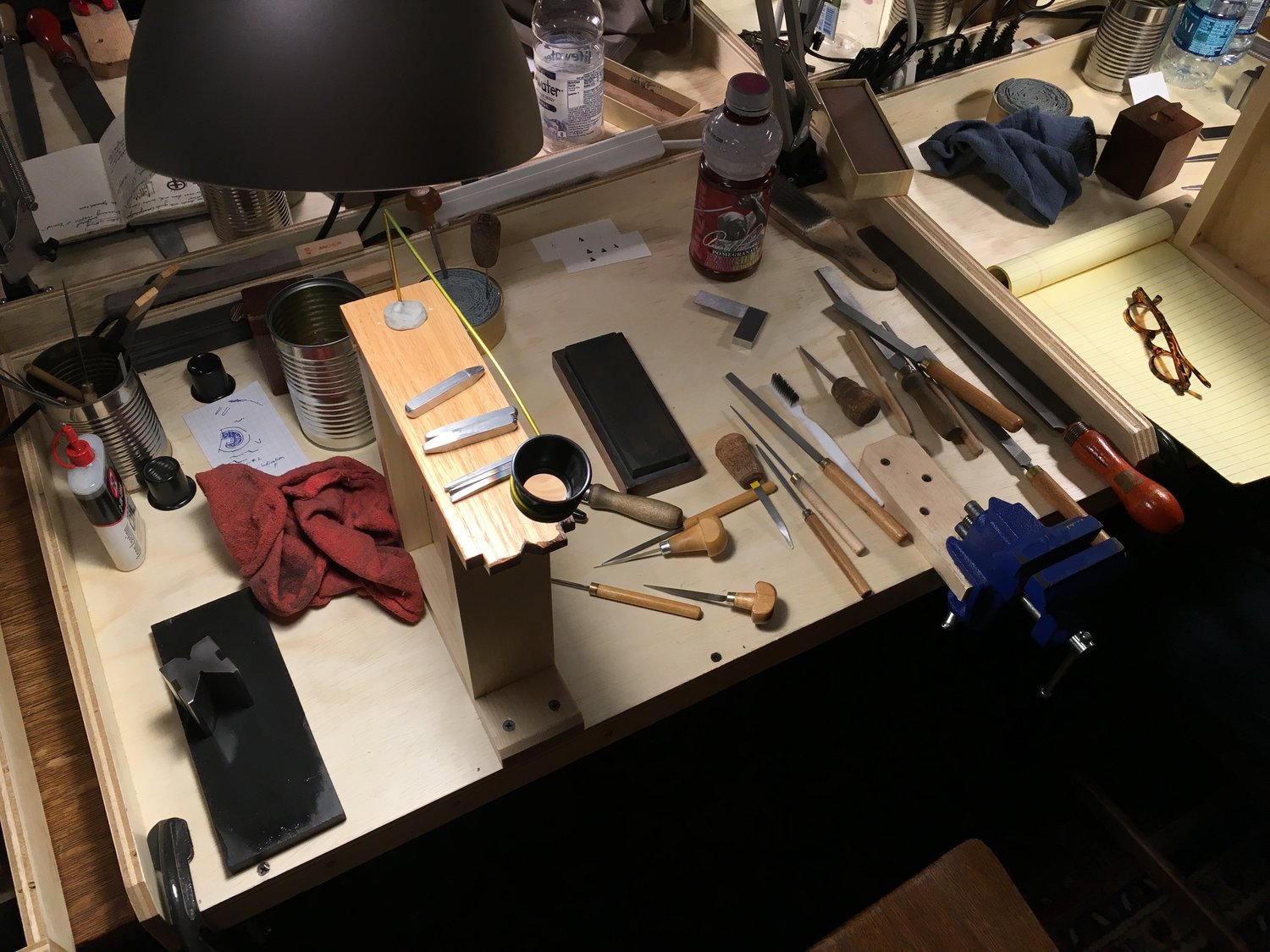 Our class’ exhibit of punches from the week. 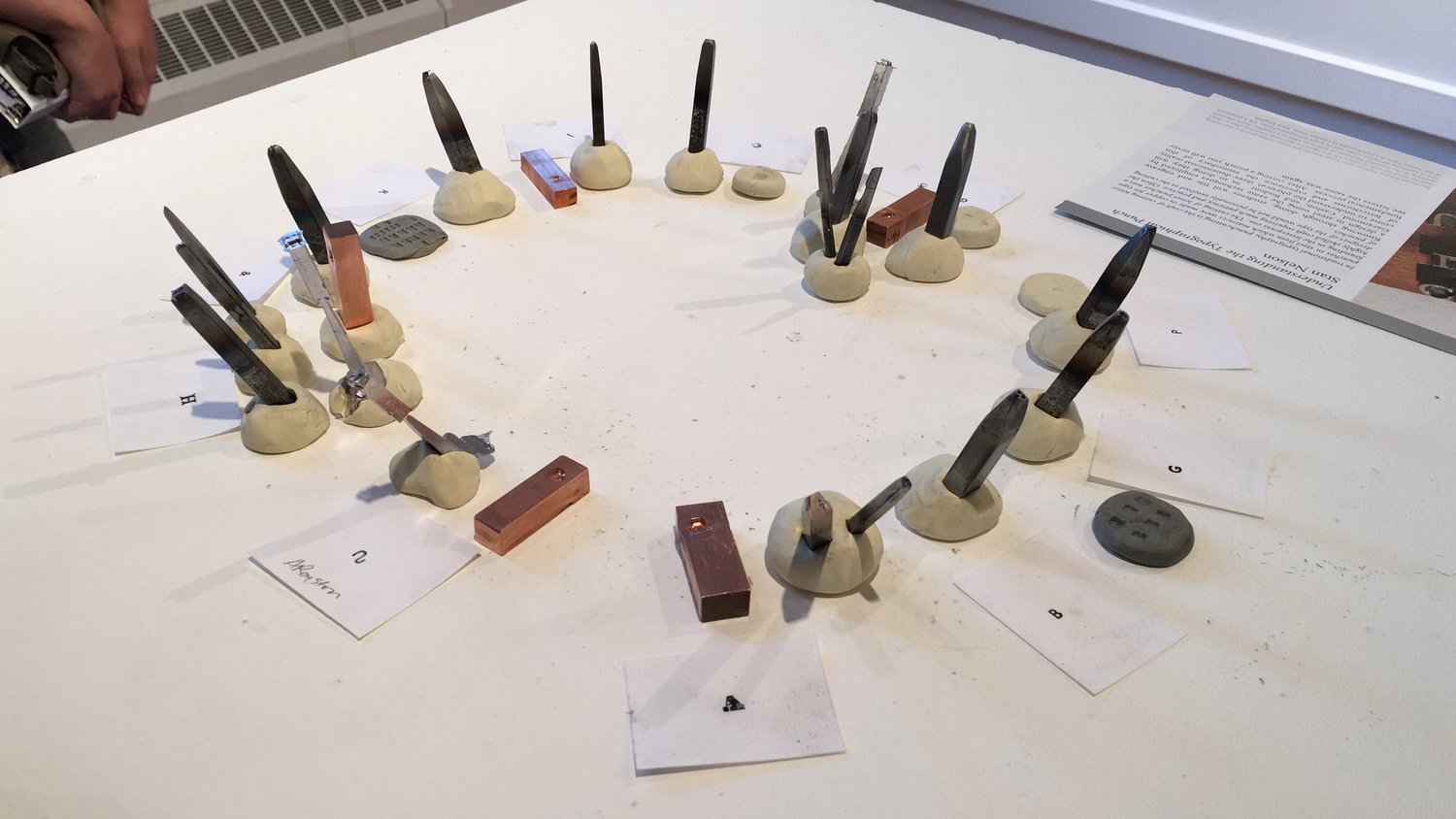 Creating punches is definitely not an easy task. And apparently it is made more difficult by the fact that the steel we use today is not as soft as steel used traditionally. But to have had the opportunity to study it is something I will always value. Furthermore, I found the class forced me to look at letterforms in new ways, and pay closer attention than I had before.

One thing that amazed me was the importance of rotating letters. I feel that too often one just looks at letters straight up, or upside down, but rarely in a full circle. By rotating them around, curves are seen in a new way and it is much easier to see their flaws. To that end, I wrote a little plugin called RotateView, which allows you to twirl around a glyph as if you are holding it in your hand. It has already proved quite handy!

If you’d like to learn more about Punchcutting, I strongly recommend watching the following two videos:

The last punchcutter is a beautifully-shot film that shows the process of cutting a punch. It features the use of gravers rather than counter punches.

Gravers & Files is a fabulous film about the famous Enschedé type foundry. It was filmed by Carl Dair, one of the last students at the foundry and is narrated by Matthew Carter, who also studied at Enchedé just before Dair.

If you ever get the chance to cut your own metal type, I strongly encourage you to give it a shot!